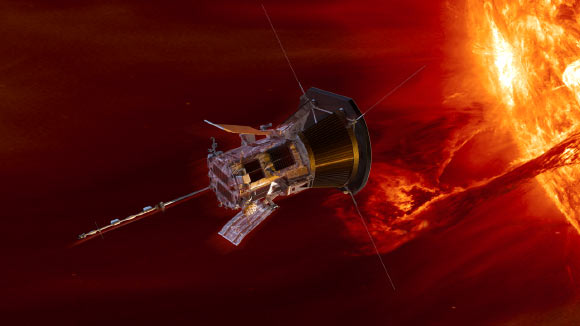 In an incredible first, a human-made spacecraft has made contact with the Sun.

The Parker Solar Probe crossed the boundary between the end of the sun’s atmosphere (the corona) and the start of the solar winds. The boundary is 13 million kilometres away from the Earth.

Parker was already the fastest human-made laboratory ever built, travelling at 146 km/s (that’s 529,000 km/h), but now it’s the first to get within 8.5 million km of the sun’s surface and sample its particles and magnetic fields.

After launching on 12 August 2018, Parker has been travelling in tightening ellipses around the sun, using Venus’s gravity to stablise and reorient its path on the way past.

Even though this is an incredible feat, what’s more amazing is that there’s video (below). It shows shows Parker flying through the sun’s corona and 1 million+ degree solar plasma. It was constructed from single images, and you can see the Milky Way and all of the planets by Uranus and Neptune.

While NASA hasn’t confirmed which planets are which, detailed internet sleuthing by astrophysicist Grant Tremblay from the Harvard & Smithsonian Center for Astrophysics has come up with some answers.

Original story: For The First Time in History, a Spacecraft Has ‘Touched’ The Sun